Here at Era House we have a huge passion and appreciation for Neoclassical furniture but we are particularly obsessed with Gustavian furniture. The beautiful clean lines, intricate hand-carvings and understated nature makes it very easy to live with.

I’d like to share a short outline of the history of Gustavian furniture – where it began and how it evolved.

The Gustavian period fell within the Neoclassical Period (1600 – 1800) during the reign of King Gustav III of Sweden.

The history of Gustavian furniture began in 1771 when the young future king of Sweden, returned home after a lengthy stay at the court of Louis XVI in Versailles.  It was there that Gustav, a patron of the arts with a passion for all things related to design, became profoundly inspired by the French Neoclassical style and decided to recreate it in Sweden.  He also drew design inspiration from the Italians during later trips to Italy.

With the rise of architectural and cultural sophistication during Gustav’s reign (1772-1792) brought on by the king’s introduction of Gustavian design principles – Sweden became known as the ‘Paris of the North’ rising the standard of style of the average Swede at the time.

The Gustavian Style that evolved was an understated, restrained interpretation of the more elaborate French Louis XV and Louis XVI styles. At first, the style was reserved for royal palaces and noble manor houses. Furniture was made from imported Mahogany and was mostly gilded or painted in classic greys and off-whites and elegantly off-set by gilt highlights. The light painted finishes made homes brighter during the long, dark winters. Furniture was intricately hand-carved and upholstered pieces were stuffed with horse hair for extreme comfort and covered in opulent fabrics such as damask silks.

This style, however, soon gained popularity with the average citizen – which lead to local craftsman recreating these costly designs from materials and methods more affordable and more readily available to them. While palaces were adorned with gilded furniture, the average home was decorated with basic painted furniture; either white-washed or painted grey or various, soft shades of cream.  Techniques such as imitation marbled surfaces, using Swedish ‘massive pine’ instead of mahogany, and painted murals on the walls instead of silk wallpaper, were used to achieve the same interior effects as were seen in aristocratic residences.

Besides the muted greys and whites, some pieces were also decorated with free-hand painted patterns known as Kurbits Folk style art which derived from the Dalarna regions. These beautiful designs were painted in an array of browns, ochres, yellow reds, oranges and beautiful shades of blue.

It is sometimes difficult to tell if a piece is Swedish or French. Early Gustavian decoration was clearly inspired by the French Neoclassical designs but the late Gustavian style was more closely identified with Italian design following the discovery of Pompeii and Herculaneum when traveling architects and designers drew inspiration from the newly excavated finds.  Some inspiration was also drawn from classic English pieces of the time.

Here are a few Gustavian design features that will help you distinguish Gustavian furniture from other Neoclassical pieces. 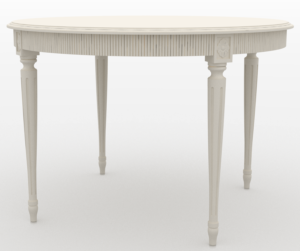 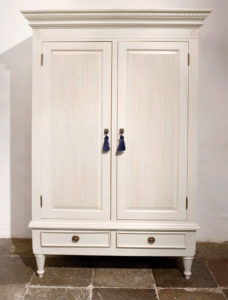 Guilloche Freeze: (an ornamental pattern or border, as in architecture, consisting of paired ribbons or lines flowing in interlaced curves around a series of circular voids) 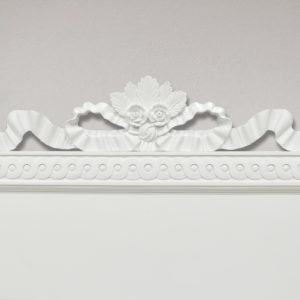 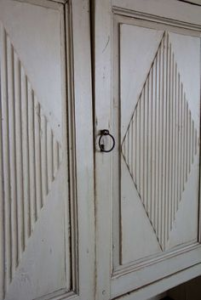 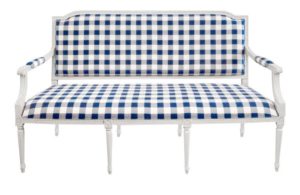 Thank you for sharing our interest today.   Until next time…

Leave your thought Click here to cancel the reply